Keep up to date with the latest agency news,
campaigns, events and insights 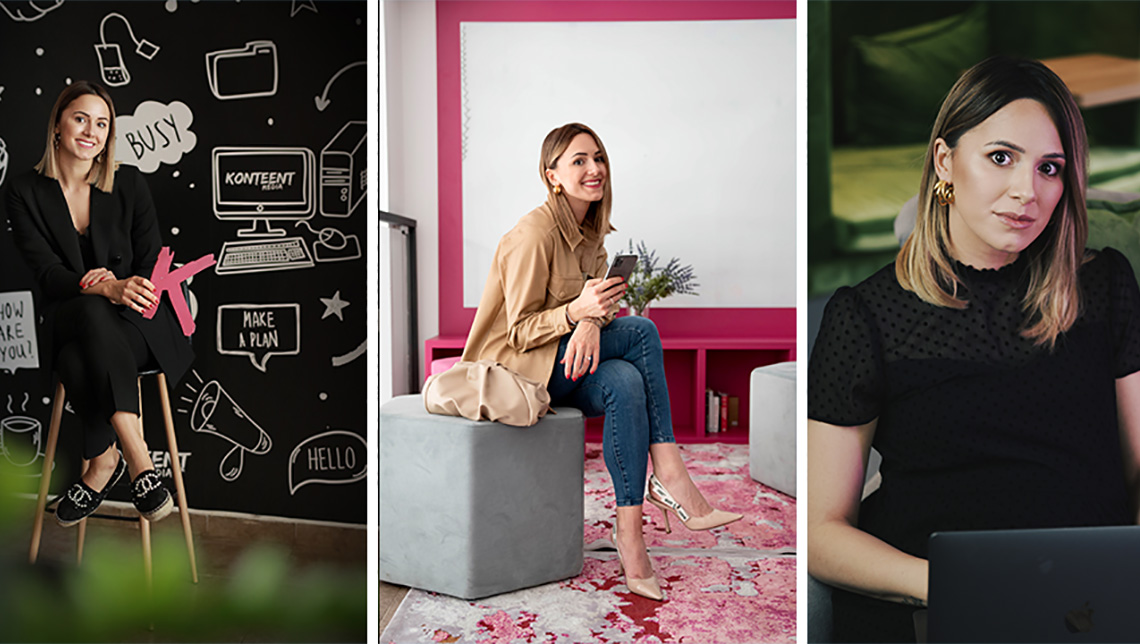 “While my fellow-students were frantically applying for and getting jobs in leading international companies, like Amazon, Apple, IKEA, and Procter & Gamble, all I could think about was agency life.”

In its recent profile of her, beautyby.ba said in its very first sentence: “Some people are predestined for great success in life, and the young Nataša Mitrović was certainly one of them.” How true! With very few winters under her belt, Nataša has managed to graduate from two different universities, complete a masters at one of the most prestigious universities in the world, open an agency in Banja Luka, attract investors from Switzerland to invest in opening an agency with her in Zürich and purchased her agency in Banja Luka, and win over major clients in Banja Luka, and, mere months ago, she attained the most important title in life – she became a mother. And not even that fact has slowed down the lightning-fast development of her career. She is currently preparing to open an office of her Konteent Media agency in Sarajevo.

Media Marketing: You say that Konteent Media grew out of your love for marketing and creating content. Where did that love and passion for marketing come from?

Nataša Mitrović: If I had to single out a particular moment when I fell in with marketing, I doubt I could. It was never a blind love-at-first-sight sort of thing, more the true kind that develops and lasts over years. Back in my high school days, I knew I wanted to deal with some form of communication, whether it would be journalism or marketing. In fact, that’s why I enrolled in communication studies, which made my love for advertising concrete and indelible. I wasn’t so turned on by the campaigns as campaigns as by their effect on sales and on consumer behaviour and thinking. I love the way that different media and marketing tactics can affect the end user, as well, of course, as rising or falling sales of products and services.

Media Marketing: You have great qualifications for your work in advertising. To begin with you studied media communications in Vienna and then Geneva. What key thing did you learn while studying there?

Nataša Mitrović: Media communications is a really broad field, and that was what I needed when I started my basic studies. To learn, explore, and get to know the various aspects of the media and communication world. I had opportunities to learn about production, advertising, photography, journalism, and content marketing, in a totally different and contemporary way. I must admit that the knowledge I gained in each of these fields has proved invaluable today, because it means that, in my agency work, I really get not just design, production, but the creative aspect too.

Media Marketing: After Vienna and Geneva, you left for a Masters programme in Madrid, at one of the most prestigious universities in the world (IE University), where you graduated with considerable success in the field of Marketing and Corporate Communications. You gained enormous knowledge there. Can you try to sum it up in a few sentences?

Nataša Mitrović: The decision to go to Madrid for my Masters was one of the best that I have made in my life. It’s difficult to put the knowledge and experience I gained there into words. I’m afraid that if I started writing about my experience in Madrid, those few sentences would very quickly turn into the pages of quite a substantial volume. The Masters programme is conceived in such a way that you don’t so much feel that you’re studying as that you’re working for a leading global company. The exams were practical, generally related to projects and presentations and writing papers. I had a chance to work and learn with colleagues coming from all around the world. There were 30 of us in my group, with 24 different nationalities between us. Working with people who have completely different outlooks on life, experiences, age profiles, and knowledge banks, and who come from different cultures is both a real challenge and a blessing. I should also point out that the professors were the directors and managers of leading international corporations and agencies, like Future Brands, Saatchi&Saatchi, Coca Cola, P&G, Nike, British Tobacco, and so many others. Being able to learn from experts of that sort is invaluable.

Media Marketing: During your studies in Madrid you had to decide what to do next and where. You faced a choice: either go back to Switzerland or go back to the Balkans and set up your own agency there and offer clients a different approach and different results. You decided on the Balkans and you went back to Banja Luka. Why?

Nataša Mitrović: Even if there were all sorts of potential possibilities, in my head there were only really two. One was to go to Switzerland and find a job in some company there, while the other was to go home. At that time, there was nothing tying me to Switzerland except my love of the country and a desire to live and work there. While my fellow students were frantically applying for and getting jobs in leading international corporations, like Amazon, Apple, Ikea and P&G, I had only one wish, and that was not to work for just one brand, one company, but to work across multiple industries and for multiple companies at the same time. All I could think about was agency life. I realised that I wanted to apply international knowledge in my own country and offer clients here a different approach and creative solutions. There aren’t that many people in the marketing world here with both the practical knowledge and a formal education in advertising. As a result, I realised that the Balkans should be my primary target area and then once I had become a shark in the Balkans, then I could make my way “back” into the big world and swim in the sea with the other sharks.

Media Marketing: While you were in Madrid, you met a professor and investor Patrick Cotting, who was a consultant for internationally known brands like Rolex, IWC, the UBS bank, and the first person in Switzerland to get a doctorate in sponsorship and event management studies. So how did he end up investing in your idea to open an agency in Zürich and Banja Luka to work with foreign clients hiring creatives from Bosnia?

Nataša Mitrović: I met Patrick near the end of my studies, when I had already decided to go back home and open an agency. Patrick noticed that, during the breaks, when the other students were going to the cafeteria, I would get out a diary on which I had written HealthIer and get down to work. He observed me for a few days and then came over and asked me what I was doing. I told him about my portal, HealthIer (www.zdravija.com), the first portal in the region dedicated to promoting personal health and healthy lifestyles. Patrick loved the concept and said “I want that in Switzerland.” I explained to him that HealthIer was my first love and first project, but that I didn’t want it to be my only one. I told him I was planning to go back home and open an agency and, once it was a success, to then head back to Switzerland and Europe. At that point he was only prepared to invest in a German version of HealthIer, called BesserMe, but Patrick nonetheless heard me and my plan out and could see the potential for collaboration. He had realised that we could offer excellent creative solutions to Swiss clients on a much better budget. And that’s what became our USP (unique selling proposition). After a few months, I found myself on my way to Zürich where we were opening an agency that would purchase my existing company in Bosnia and Herzegovina (now Konteent Media). And that’s how the Konteent Media group was born, with its headquarters in Zürich and me at the helm as CEO and majority owner.

Media Marketing: Patrick has worked on organising events with an international profile, like Formula One and FIFA. Have any of these experiences been transferable to Konteent Media?

Nataša Mitrović: Of course! We always consult with each other when it comes to organising events and when we’re preparing or working on projects that require sponsorship. His proposals and ideas are often “ahead” of the times, and that’s the point, to be pioneers in the transfer of global knowledge and experience.

Media Marketing: Your initial goal, on founding Konteent Media, was to work mostly with Swiss clients. Expanding on the Bosnian and Herzegovinian market wasn’t your priority. Nonetheless, as time has gone by, you’ve adjusted that decision. Why?

Nataša Mitrović: That’s exactly right. When I came back to Bosnia I saw a big gap in the market and realised that I could offer better solutions and a different approach to clients from anything they were currently getting. Based on the number of clients that Konteent Media has, it looks like I was right.

Media Marketing: Can you present Konteent Media and its internal structure, its clients, et cetera, briefly?

Nataša Mitrović: Konteent Media is primarily a team of wonderful people, direct and sincere people who know how to get even the worst day back on track, and who inspire you to go to the office every day with a smile on your face. It’s not just that they’re great bighearted people. There also superb marketing experts, creatives, designers, and digital experts. As I’ve already mentioned, our client numbers are growing daily, and our list of satisfied clients includes Gazprom, the Banja Luka Brewery, Esensa, Persen.ba, X Express, Banja Luka Markets, Sava Semberija, and so many more.

Media Marketing: After three years, what do the initial results indicate? And, is Patrick satisfied, as an investor?

Nataša Mitrović: Our results indicate that we are on a positive, upward path. Over time, we have been seeing better and better results, creatively and financially. Konteent Media has been steadily gaining recognition as an agency throughout the region. Patrick is definitely happy, but he is sometimes puzzled and surprised by how fast things happen in the Balkans and how fast the progress we’re making has been. He can find it difficult to understand the mentality here and how we work, but I am doing my best to get him acclimatised (with ćevapi and the occasional shot glass of rakija ).

Media Marketing: You are currently opening an office in Sarajevo and expanding. Do you already have clients, or you just now preparing to go out and recruit them?

Nataša Mitrović: That’s right. We are currently opening an office in Sarajevo. We’ve been doing business with clients in Sarajevo for years now, because that’s where all the major companies have their headquarters. So, if we want to grow client list and expand the agency, then that’s the logical next step.

Got a great idea?
Let's colaborate.